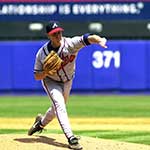 Randy Johnson who plays for the Arizona Diamondbacks recently pitched a perfect game to score a career no-hitter in the record books. His team beat the Atlanta Braves 2-0 at Turner Field in Atlanta. Johnson is the oldest pitcher to throw one of 17 perfect games in baseball, a very rare feat by any measure. A perfect game happens when not one of 27 batters gets on base. In a no-hitter, no batters get a base on a hit, but they can get walked. Johnson’s last no-hitter was in 1990. His 14-year hiatus between no-hitters is the longest in baseball history.

A no-hitter is just as much a mental game feat as a physical feat. As the game progresses, it becomes harder and harder to focus on the task of pitching because each batter can end the no-hitter. The pitcher is out of his comfort zone when trying to keep a no-hitter going later in the game. Bob Brenly, Arizona’s manager, said, “There’s no such thing as a routine play after about the sixth inning of a game like this. I’m sure every guy who had a ball hit to him had their heart pounding.” From the sixth inning forward, Brenly was frozen in the dugout watching it all happen.

To make matters worse for the pitcher, everyone in the stadium knows what is happening when a pitcher is working on a no-hitter. An old superstition in baseball is that you do not mention the possibility of a perfect game or no-hitter out of the fear of jinxing the pitcher. No one wants to snap the pitcher out of the zone and disrupt his flow and concentration when it does happen. “There was a tremendous rhythm out there. His focus, his concentration, his stuff, everything was as good as it could possibly be.” Brenly said.

The biggest challenge for the pitcher is to not think about the no-hitter and continue to focus on getting the batters out one by one. He learned by experience that you have to throw one pitch at a time and get one out at a time. He said, “I’ve been in that situation a few times and have lost a few no-hitters in the ninth inning. If you get into the ninth inning, you’ve still got three more outs.” The tension and anxiety about the result of throwing a perfect game is what derails pitchers when they realize they are throwing in the zone. Johnson was well aware that he was working on a no-hitter. “Obviously, I knew what was going on, but it’s not over until you get that third out,” Johnson said.

He attributed his experience in throwing no-hitters and almost no-hitters in the past to his success. As a fact most of Nolan Ryan’s seven no-hitters came later in his career. “The more you learn now, it’s going to make the game a little bit easier for you at a later age…. Your workout ethic now will instill discipline in you and you’ll have a routine. If you learn those things now, you’ll only get better as you get older and more experienced.”

It takes tremendous discipline and focus to keep a no-hitter going. As you go deeper into the game, it becomes more difficult to focus on the task at hand. The first mistake most pitchers make is to think too much about the prospects of throwing a no-hitter. The mind gets too far ahead and distracted from the current pitch. Most young athletes when they get the lead in a game or on themselves, can start to protect that lead and play safe or tentative.

For me, the key is to continue to focus on one pitch at a time, getting one batter out at a time, not thinking ahead, and not making any judgments about your performance. Your comfort zone starts with an expectation of what time, score, or result you think is possible. You have to let go of these expectations, not make any judgments about how you are doing, and get into the zone of concentration I often talk about with my students. Johnson, for one game was able to throw each pitch with conviction, focus, and confidence without being derailed by baseball’s oldest superstition of not saying a word about the possibility of a no-hitter.