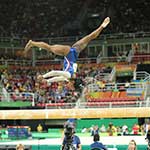 Competing at the collegiate level and beyond are often long term goals for many competitive athletes.

In the sport of gymnastics, very few athletes are able to make it to the college level, and only a select few ever earn a spot on an Olympic team.

Head Mens Gymnastics Coach Miles Avery of Ohio State University believes it takes a very strong mental person to be able to do gymnastics at the highest levels. Coach Avery has had numerous years of experience coaching both collegiate and Olympic level gymnasts and knows what it takes to be a successful high-level gymnast. Coach Avery stresses the importance of getting the most out of training and the impact it can have both in practice and in the competitive arena.

Coach Avery has recognized shared characteristics among his top athletes. They are able to make the most out of each practice, they can move on quickly from mistakes, they integrate mental rehearsal into their training, and they are confident in their ability.

Practice efficacy is an important aspect of training for high-level gymnasts. It involves developing the effective mental preparation that is necessary for athletes to be prepared for competition. It is also a way for athletes to develop a strong sense of confidence in their ability. Being mentally prepared for practice not only helps athletes develop efficacy, focus, and confidence in practice, it also prepares athletes for unexpected challenges that may occur in competitions. Coaches can use a variety of techniques in practice to get their athletes mentally ready for competition.

Modeling meet situations by adding crowd noise, spectators, or judging routines can make practices seem more like competitions and can better prepare athletes for meet situations. “We do some things such as have athletes see themselves performing, playing the crowd noise, and encouraging them to go through their routines one-by-one at the end of the year just to get them ready to be successful,” says Avery.

The ability for athletes to maintain composure during difficult situations or regaining composure after making mistakes is extremely important. “The best athletes are able to shake off things, and don’t let things linger within them,” says Avery. In a sport like gymnastics where there is not much time between events, it is important for gymnasts to successfully switch their focus from one event to the next. In competitions, there is often an opportunity to make up for previous mistakes on the upcoming event. Successful gymnasts are able to regain their composure and shift their focus onto the next event.

Coach Avery believes that confidence is one of the most important qualities a high level gymnast can possess in order to be successful. Not only does this confidence allow them to excel in practice, it can also carry over into competition. Gymnastics is a sport of numbers and repetition. “If athletes know they have done the required number of skills in training, their confidence on the training field carries over into competition,” says Avery. Because athletes spend the majority of their time training, making the most out of practice is extremely important. Coach Avery feels that athletes should rely on all they have done in training to get them ready for competition. He reminds his athletes to put themselves back in their workout facility during competition. This allows them to transfer their practice confidence in to competition confidence.

“Athletes can fall back on then numbers that they have performed in practice to make them ready, and that is where their confidence to compete at high levels comes from,” says Coach Avery. He also believes that many gymnasts are taught from a very young age to use mental imagery and he believes that the majority of gymnasts use it. “Sometimes they do daily in training and obviously in competition,” says Avery. He also instructs his athletes to recall the work they have done in practice and all of their days of training in order to increase their mental preparation for competition. He believes the best gymnasts are able to integrate mental rehearsal into their practice regime.

Coach Avery has trained some of the best male gymnasts in the world, and understands the pressure of competing at both levels. Competing in the collegiate ranks can put a great deal of pressure on athletes. For many gymnasts, competing at college or the Olympics may be the first time they may have experienced training and competition as a team. They may feel the pressure to do well for themselves, and also be successful in order to not let their teammates and coaches down.

“It is very hard for a lot of young gymnasts coming to college who have only competed as individuals and then come to a college team and they have to hit their routine for a team. Even for some Olympians, if they have not had that collegiate experience, it is hard to make the transition to feeling like they have to do well for the U.S.A. and I have to compete for more than just themselves,” says Avery.

Establishing a strong sense of teamwork is very important, especially during pre-season. The more support each member of the team feels, the more confident they will be in representing their team in competition.

Coach Avery believes the pressure to compete on an Olympic team is more intense than the pressure to compete in college. “In college, if an individual does not perform well, they believe they will let their team down. At the Olympic level, if a team member does poorly, they believe they will let their country down. In the Olympics, the pressure is magnified in terms of who they are thinking about and who they may let down,” says Avery.

High-level gymnasts possess certain qualities that allow them to excel above their competition. In his many years of experience, Coach Miles Avery has observed that some of the best gymnasts he has worked with were able to regain composure after mistakes or after a poor performance, possess high confidence, make the most out of each practice, and integrate mental rehearsal into their practices and competitions. Being able to recognize what it takes to compete at a high level in gymnastics is important for both coaches and gymnasts. Together, coaches and their athletes can work together in order to ensure the athletes full potential is achieved.