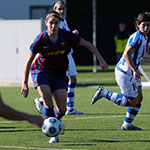 When Michelle Akers was 10 years old, she had a dream to be one of the best players in the world and play in the world cup. For Michelle, playing soccer was about the love of the game and the excitement of the challenge of a tough, competitive game. “Playing for fun meant competing at the highest level and being the best. And that is part of what drove me, aside from just playing soccer and the love of being on the soccer field,” Akers said.

Sometimes it is hard for kids to hold onto their dreams in sports when others criticize the boldness of the dream. The people around her thought that her grandiose goal was just the imagination of a 10 year old. However, what others said to belittle her dream did not matter to Michelle. She refused to go to the park and just “play like other girls do.” She had higher aspirations and dreams. She refused to accept what adults and friends told her at that time about what normal girls should do.

“I wanted to be the best player in the world, and that was crazy coming out of the mouth of a 10 year old, but as a 25 year old that was perfectly legit standing on the field of the world cup field,” ~Michelle Akers

The great players just love competition. Love of competing is what matters most when crunch-time comes. The great players really thrive on the moments at the end of the game when the game is on the line and you have to step it up and score. Some players hate to be in that position in crunch time. How you perform in that instance when it counts the most is what great players love, they love the challenge to shine and step it up, Akers told me. The harder the game, the more challenge is present, the more fun she has with the game.

It started with a dream very early on, but it required her to develop her physical skills through hard work and dedication and earn her confidence during the early years of soccer. As a freshman in college, she started to standout as a “go-to player” and that is when she realized she was good and her confidence started to flourish. She wanted the ball more and more because of her belief in the her ability to score and get the job done in crunch time.

According to Akers, playing in the world cup is not just about having a dream and refusing to give in the masses. She said that having confidence in herself, believing that her team was the best team on the field, and the development of teamwork among the members of the world cup team were all critical to winning the world cup. She said about her world cup team: “We had the edge. We (the US Team) had this mentality that every time we stepped on the field we were going to win. The teams we played against knew that; they were already worried about it before we even started.” 15 years earlier, Michelle already knew what no one else thought possible.