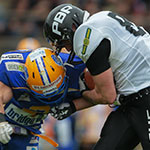 ..and that’s why coaches, just as the athletes I work with on the mental game, need to develop strategies to deal with the myriad of responsibilities coach faces in today’s high-tech and rapid information world.

Using the advantages of mental preparation, football coaches can get their game faces on for the new season to help them prepare for any challenges, expected and unexpected, to come. Great athletes, like great coaches, naturally know how to prepare the X’s and O’s for competition and have developed effective rituals and routines during their careers to get into the proper mindset before competition. The same mental preparation strategies that athletes employ can be applied to the challenges and responsibilities coaches face every football season.

The purpose of mental preparation is just that–helping an athlete, team, or coaching staff get into a confident, prepared, and focused state of mind for an upcoming game. Football coaches too should develop a “game plan” for the upcoming season that helps them feel prepared for the challenges of leading a team.

Below are four important reasons to use mental preparation:

A prepared athlete is a confident athlete and a prepared coach is a confident coach. Developing strategies or game plans for the upcoming season can help you not only feel confident, but it also helps you focus on what is relevant to your task as a team leader. Read on to discover four strategies you can use to prepare mentally for the new football season.

Plan for Greatness, but Prepare for Setbacks. The first step in good mental preparation for the upcoming season is to set your goals high and rally the team around these goals, which most good coaches have mastered this task. Maybe more important is your ability to anticipate any challenges that inevitably will become a distraction to the team or detract from your mission. You don’t need a crystal ball, but you can have a brainstorming session with the staff to discuss potential setbacks that you will need to overcome to reach your goals. The next step is to develop a predetermined strategy for each challenge (or team distraction) you can anticipate or predict.

Terry Hoeppner, head football coach at Miami (OH) says that a team must have contingency plans for the unexpected. Planning for the unexpected actually gives you the edge when something does not go according to plan. “Have a plan, work the plan, and plan for the unexpected is our motto. Football coaches are constantly asking what if… What if this happens, what it that happens? You do not want to be caught off guard. Then the unexpected works in our team’s favor because we are anticipating and understand things will not always go as planned and we can react appropriately,” said Hoeppner.

For example, some stadiums can be intimidating to the visiting team. Head Coach George O’Leary at UCF prepares his team for hostile stadiums where the noise could be a distraction. He plays crowd noise in practice to prepare the team mentally for this challenge. “As a head coach, I’m am always trying to get the coaches to learn and stay ahead of the curve and anticipate what will happen. It’s just not knowing your playbook, it’s being aware of others’ strategy. You do not always have time to react–it’s the quick reaction from the sidelines that is key if you are going to adjust and be successful,” said O’Leary.

Much of my work on mental preparation with athletes and teams focuses on helping them feel well prepared to handle any unforeseen or expected challenges. My suggestion is that you think ahead to the upcoming season and make a list of the potential challenges you will face. I’m sure you have already thought about this. This is not negative or pessimistic thinking! This is good preparation if you develop strategies to overcome any challenges that can upset the team confidence or chemistry. For example, if you lose a key offensive player to injury, what is the strategy or plan if this happens so you can keep the team firing on all cylinders?

What follows are a few questions you might need to address in the upcoming season. What is the process for overcoming team conflicts? How will you prepare to play a team you have never played before? What is the strategy for dealing with negative media or press? How will you rally the troops if you lose to a tough opponent? How will you challenge the team to focus at peak levels when your team plays a much weaker opponent? How will you keep the team in the winning spirit if you surpass the team’s expectations for number of wins in a row? If the schools reputation becomes damaged in some way by a student-athlete, what is the most effective way to deal with this situation? Given your experience with unexpected distractions, you can anticipate many potential challenges before the season starts so you can keep positive team momentum during setbacks.

Always Two Sides to the Coin

In my opinion as a mental game coach, every football coach should learn how to “re frame” or perceive challenges during the season in a way that helps the team succeed. Some of the great coaches in history have been able to put a positive spin on any situation to help the team maintain a positive attitude. Re framing (changing your perceptions of) a potentially negative scenario into one that will help the team succeed is instrumental to good coaching. Coach John McKessick of Summerville High, who has won more football games than any other high school coach, said that you have to look at any situation, good or bad, constructively. He said, “I tell the coaches all the time, don’t look for reasons not to win or not to be successful, look for ways to be successful or produce results.”

A great example of reframing happened just prior to the 1977 Orange Bowl when Lou Holtz Arkansas team lost three players that were responsible for 78 percent of offensive production due to violating team rules. His team was a 24-point underdog three days prior to the game. Described in Coach Holtz’s book, Winning Every Day, the feeling in the locker room was one of defeat without their standouts. Coach Holtz held a team meeting to discuss the reasons they could win.

Holtz was able to help the team focus on their existing strengths. The players discussed at least three reasons why they could win: (1) The defense was still intact and it was rated # 1 in the country; (2) they had a powerful offensive line as well as the best punter and place kicker in the country; and (3) the quarterback was a terrific competitor and he would elevate the play of the team. As a result, the players’ attitudes changed and now believed the team could win the Orange Bowl. That year they beat Oklahoma 31 – 6. They won that game because Holtz helped the team change the way they perceived themselves.

“Look at an obstacle as a challenge and an opportunity to grow from the experience of overcoming it.” ~Barry Switzer

Another favorite example of how to turn a potential negative into a positive is how UCLA Basketball Coach John Wooden responded to a rule change to stifle Jabbar’s offensive dominance on the court. In his autobiography, Kareem, Jabbar discussed UCLA Coach John Wooden’s ability to reframe a negative scenario into one that worked for the players. Just before Jabbar’s junior year at UCLA, the college rules committee banned the dunk shot, which was put in place to lesson Jabbar’s impact. Wooden told Jabbar that the rule change would only make him a better, well-rounded player by forcing him to have a softer touch around the basket, which would come in handy when he went to the pros and then could use the dunk. Jabbar said that Wooden was correct — it made him a better all-around player when he got to the pros.

Find the Best Talent – on and off the Field

Smart coaches surround themselves with the best support personnel. When asked about what has been a key to his coaching success, Coach John McKessick suggests that head coaches build a good support staff and personnel. Having the right support personnel is just as important to success as is having talented players. Player talent is a good foundation for success, and if all things are equal, to win, a team must have the best coached team. McKessick said every person associated with the team is important. The school board, principle, administrators, coaches, training room, players, and fans all need to support the goals of the team. “It starts at the top of the school. Good administration, principles, and a good coaching staff. Loyalty. I have been real fortunate to be surrounded by good, loyal people in my career,” said Coach McKessick.

One of your tasks as coach is to prepare your personnel, support staff, and team members to have the same purpose and dedication to the team as you do. You should be proactive and address any “dissention in the ranks” or concerns from staff or administration if they are not fully dedicated to the team’s success. Loyalty, team tradition, and common goals are the building blocks that support team goals and teamwork.

“Everything you do as a coach, as a role model and as a leader, has to be laid out in a more concentrated, better organized way than ever before. This is a great opportunity for all of us in intercollegiate athletics to really show our leadership capabilities.” ~Terry Donahue, Former UCLA Coach

If you Get Sidetracked, Get Back on Course

One of the philosophies I teach is that coaches need to first define the goals and then immerse themselves in the team’s mission. Define your coaching priorities and focus on what is relevant. What is really important to good coaching that you need to focus on? A good coach prioritizes his tasks prior to the start of preseason and prepares to focus the staff and players on what is relevant to the team’s success. You can easily to become distracted and get off-course in today’s world or rapid information. The stakes are high in college athletics, jobs are at stake, and the media loves to dig up dirty laundry. A coach easily can get lost in distractions and issues that are not relevant to daily coaching needs. Just as a football player needs to let go of his missed tackle, coaches need to be able to stay on course when sidetracked.

“It’s not the setback that kills you; it’s how you handle setbacks. People are going to make big plays. Go on to the next play, know what the mistake was, correct it, and go on.” ~Coach George O’Leary, UCF Head Coach

Just as I ask the students and the teams I work with to stay “on-task,” you too need to stay the course and help your team members focus on what is relevant to good execution, improving each day, developing teamwork, and enhancing confidence in players. You do this by prioritizing your tasks as coach, then defining what is relevant, and what is not relevant to successful coaching. Finally, your goal is to absorb yourself into what you should work on and disregard the distractions that suck your energy away from your mission.