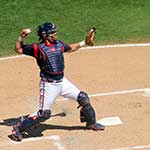 Crack! The pitcher looks up from his hard green plastic bench to see the speedy outfielder approaching the 8-foot high chain link fence.

Picking up the ball in the sunny August sky, he starts to think, this ball has a chance. The outfielder scales the fence with his right foot and stretches his Rawlings over sized mitt to the sky. Yes! The ball is over his head, and over the fence for a home run, 4-3. The sellout crowd lets out a loud groan in unison. Immediately the bullpen phone shrills. The bullpen coach bellows, “Rivera you’re up.”

Being a closer in baseball is a high stress, highly compensated position in the game of baseball. To be a successful closer you must be in total control of your emotions and maintain total concentration and focus. This ability to focus, called “getting in the zone,” helps all highly skilled professional athletes perform at their peak.

This is what brings an average player up to the elite level, the athlete’s ability to focus and take his game up another notch. As a closer, you are called into a game to protect the lead. When your team is on the road you pitch in front of hostile fans. These fans yell, scream and even call you names to try to get you out of your “Zone.”

Here is what Mariano Rivera had to say about coming in to close a game:

Let’s analyze what Rivera had to say. First off he has a goal. The goal is to get three guys out and that is what his mind is set to do. This is his mission that drives his attention.

My goal is to get three outs, get the save, and help the team win. To get those three outs, what action will I take? Well he mentions, “I don’t worry about things I can’t control. Going into a game I don’t worry about 50,000 fans screaming or booing me.” Here Rivera has mastered one of the most important concepts of successful athletes. I focus on what I control.

What Mariano can control is his mental routine in the bullpen when he gets the call to pitch. For example, maybe he throws 15-20 pitches, and practices throwing a fastball inside, outside, low, and high. He then switches to his cut fastball and throws those for strikes.

While he is in the bullpen, he is mentally concentrating on his pitching, balance point, and release point, which are all things that make him a dominating pitcher. Each one of these things he personally controls. When he goes out to the mound, his first action is to use his pre-pitch routine to mentally block out the crowd as they will have no direct affect on his actions.

While he is pitching, the PA system might be playing loud music and it might start raining. All this does not matter because as long as the game is still being played, he still has to “get three outs.”

When he is on the mound chances are he will face the other teams’ best pinch hitters. For athletes like Rivera, his mental approach is a hitter is a hitter, I can get anybody out.

It doesn’t matter whom I pitch to, as I can’t control that. What I do control is having knowledge of the scouting report. If I am fully prepared I have read the scouting report on every single hitter, I can then focus on exploiting that player’s weakness as a hitter.

The concept of focusing on what you can control also applies to the batter. Many times in the majors when a batter is struggling with hitting you will see them engage animatedly with the umpire over a ball that was called a strike.

If an umpire calls a ball a strike, it’s a strike and he is not going to change his mind. A mentally strong batter will step out of the box and refocus on the task. The tasks maybe to get a hit, move a runner or hit a sacrifice fly. A good hitter will quickly go over the count in his head, and remember what pitch the pitcher likes to throw with this particular count. He will then get back in the batters box and know that any pitch in the same area, as the last one will be called a strike. So you either need to hit the ball or foul it off and wait for a better pitch.

Focusing on what you can control applies to all sports. In football, a receiver has to have complete concentration on the football and is expected to make every catch that is thrown to him. The player cannot lose focus by complaining about defensive holding or the field conditions being bad. He cannot control that.

What he can control is good pass catching fundamentals like watching the ball into the triangle formed by his hands and catching it. Catch the ball with the hands. It does not matter if it was thrown high, or not where you like it. The job is to mentally focus on the football and watch it being caught. Remember, when I focus on what I can control, I am in control.

Here are 4 tips for focusing on what you can control: