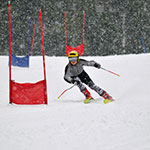 When you are competing, are you able to push when you are exhausted and uncomfortable? How often can you push past your limits in practice and training sessions? Can you regularly achieve levels of discomfort as you challenge your physical capacity? The key to challenging yourself physically is training the mind to overcome self-imposed limitations. Pushing the limits is a habit requiring the daily commitment to explore the limits of performance mentally and physically. Pushing the limits is a characteristic of mentally tough athletes.

Justyna Kowalczyk is a 31 year-old Polish cross country skier known internationally for her ability to push herself physically to high levels. Kowalczyk has won 5 Olympic medals and seven World Championship medals along with 49 World Cup Victories.

Kowalczyk demonstrated her mental toughness and ability to push the limits in her 2014 Sochi Olympic the 10-kilometer classical-style race. Two weeks prior to her signature race, Kowalczyk injured her foot and the x-rays indicated a fracture, “It’s something big for me because I broke my foot two weeks ago.” Kowalczyk had been training for this event for four years and now she needed to put her mental toughness to the test, “I felt an ache in my foot, but I overcame it. We knew what we were here for. It was unlucky that it happened to me. Everything was going wrong, but I am not one of these people who give up.”

Kowalczyk realized her circumstances were unfortunate but refused to allow her condition to limit her and dictate how she performed. Mentally tough athletes understand adverse conditions will happen but know it’s their response to adversity that has the most profound impact on their performance.

Not only was Kowalczyk’s physical condition hindered, the course conditions were far from optimal. The weather was warm, 12 degrees Celsius (53 degrees Fahrenheit), and the sunlight was bright, which made course conditions very challenging. While her rivals tired in the heat, Kowalczyk powered forward in her characteristic relentless, mentally tough style to finish in 28 minutes, 17.8 seconds. Kowalczyk was able to mentally distract herself from the pain and tough out the course conditions to win Olympic gold medal by more than 18 seconds.

Kowalczyk epitomizes the mental toughness of an Olympic champion and described how she was able to push the limits during her race, “I think it was the hardest 10K of my life, especially the last big uphill. I was fighting with my body. In the last 30 meters I was almost walking. I was so tired.”

Keys to Developing Mental Toughness and Pushing the Limits:

You must develop the ability to switch focus to the things that enhance your performance. (For example, if you are tired and hurting, you can distract yourself by focusing on your tempo.) You need to remember the payoff. All the discomfort you are experiencing leads to a greater reward.

You need to learn how to trust yourself in competition. Know what you have prepared in practice and trust in your skills. Stay confident in your skills and abilities. Use positive self-talk and boost yourself up when the going gets tough.

Remember to focus on what you can control when pushing your limits. If something goes wrong or isn’t the way you expected.

Focus on your own skills and what you’ve practiced. Focus on your game, not on your competitors. Don’t compare yourself to the athletes you are competing against. This will only undermine your confidence, thus making it difficult to push your limits. Remember to focus on the process, not the results. By focusing on the results, you lose focus on what you are currently doing. Your whole focus should be on what you are doing if you want to perform your best.