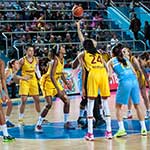 In some sports like football, athletes in their 30s are considered old because of the toll football takes on the human body. In sports with less contact, such as golf, golfers able to play into their 60’s and still be very competitive such as Senior PGA TOUR players.

When I think of successful older athletes, Nolan Ryan of the Texas Rangers comes to mind. He played for 27 years in the MLB. Ryan pitched rather successfully well into his 40s and retired at the age of 46 after a career-ending injury.

With a task as demanding as pitching and the number of pitchers that undergo arm surgery, I wonder what extra steps Ryan was forced to take to stay competitive as a pitcher in the MLB. Ice after every practice and game? Additional physical therapy each week? More time spent in the gym to keep the arm and body in shape? More MRI’s to investigate a the extent of a nagging injury? More time off between games to recover the arm? Nolan Ryan would have to “rebuild” his arm from one start to the next, a long tough process that the great pitchers do, but few fans realize. Before the 1993 season, Ryan announced retirement. His arm finally gave out in August 1993 when he tore a tendon in his throwing arm, ending his career several weeks prematurely.

Indeed, senior athletes have additional challenges to stay on top of their game as new talent comes along each year. The subject of this article, Ron (peaksports.com member) is a 41-year-old action shooter who is an example of an athlete who pushes his body and mind to the limit in order to stay competitive. Action shooting involves shooting multiple targets from various positions while moving through a course of fire as quickly as possible. Ron is sponsored professionally and has finished in the top 5 at national championships. He trains hard and has had a lot success over the years. As more younger, stronger, and dedicated competitors get involved in the sport, he feels to need to push himself harder to compete at the same level. More intense and harder training has led to a number of injuries including a torn rotator cuff that will require surgery soon.

Ron will not be able to compete this summer season, missing the national championships and will be facing the challenge of getting back to pre-injury form. As Ron awaits an upcoming surgery. he can’t help but get thoughts about not being able to compete at the pre-injury level. He also fears re-injured from training harder once he is in full recovery mode. His biggest fears are thoughts about his ability to recover fully and be competitive once again and the idea that he knows that will need to push harder to maintain and improve upon his current skill level. “I know that I can accomplish more, but as I get older, I feel it’s a race against the clock,” Ron said. What makes matters worse is the fact that Ron does not know the extent of the injury until the doctor gives him an update of the damage after the surgery.

I too had rotator cuff surgery a few years ago, which was supposed to be microscopic and to repair a torn rotator cuff. After the surgery, the doctor told me that he had to make a large incision to not only repair the rotator cuff, but to also repair a tear in the long head of the biceps and perform a chromioplasty (shaving the Shoulder bone down to make more room).

So I can identify with Ron’s concerns and fears about injury, recovering 100% from injury, and making a successful return to competition. However, many of these fears are very common for athletes in Ron’s situation. This may not be comforting to Ron, but I can help him to take a more positive attitude about his injury in the hopes to lesson his anxiety and apprehension and remain more confident about returning to competition.

My first recommendation for Ron would be to prepare for the worse, but expect the best. There is no need to ignore the severity of the injury and go into denial about the extent of the possible injury. He should be prepared mentally to cope with any reality post-operation. This means having a plan for recovery (based on the possible outcomes) and knowing that the number one cause of forced termination from sport is injury. Therefore, that possibility may exist. However, with advances in medicine and surgery today, he has a good chance to fully recovering with the proper physical therapy.

The next area that Ron has to address is his fear about injury and returning to competition. I certainly do not want Ron to think catastrophic thoughts about his situation and create additional stress that may be unnecessary. The goal would be to reframe his fears into thoughts or belief that are in line with his goals and helping him make a successful return to competition if he chooses to commit and dedicate himself to getting back into the mix. Sometimes it’s hard for athletes to let go of a sport they love and that certainly is an option, which is hard for committed athletes to consider. But this thinking is premature at this point in the game.

What are the major fears that are causing anxiety in Ron’s case and other similar situations? Here are the stated fears/doubts:

As you read the above doubts or fears, they seem logical, but probably ineffective for his state of being and ability to come back strong. One common technique used to change negative thoughts into positive ones is called reframing. Reframing is about challenging beliefs and changing the way we think about certain situations. The goal is to reframe Ron’s fears to reduce the emotional impact and help Ron be more confident and think positively about his return to competition.

Here is an overview of the process of reframing:

Fear #1: “Will I be able to make a come back after the surgery?” This fear will eat away at confidence if not kept in check. Ron needs to adopt another belief or thought such as, “I will come back stronger than ever after injury.” He can also motivate himself with other athletes that have come back successfully after an injury. For example, Ben Hogan almost ended his golf career by a near-fatal accident in 1949. Hogan received numerous surgeries for blood clots in legs left circulation impaired. He came back to dominate major tournaments and won U.S. Open in 1950, Masters and U.S. Open in 1951, Masters, U.S. Open, and British Open in 1953, a theretofore unequaled achievement.

Fear #2: “Will I return to my previous level of performance when I return?” This is probably the number one fear athletes have about injury. This may appear to be a logical question, but it can introduce doubt in the athlete’s mind. This statement should be re framed too: “I will be stronger and smarter when I return to competition after my full recovery.”

Fear #3: “Will I have to train even harder after injury to compete at a high level and keep up with the younger competition?” This fear can also undermine confidence and make the athlete over-train or try to make a fast recovery prematurely. This statement can be changed to a more effective self-statement: “I will train smarter during my rehabilitation, be patient with my return to competition, and use the younger competitors to help motivate me to be the best I can be.”

Fear #4: “If I can’t return after the injury, how will this change my life?” This statement may have some functionality after surgery if Ron cannot return to his sport because he needs to consider how his life will change when the time comes to retire. However, for now I will assume he can return to sport successfully. Here is the reframe: “Let’s focus on getting the injury repaired and getting back into competition first, and then I can think about how my life will change after I retire from sport.”

The next step for Ron is to post these reframes where he can rehearse them everyday. You and I know it’s easier to repeat the reframes and new beliefs about returning to sport, but it’s more difficult to believe the new beliefs. Ron must make a shift in his beliefs and adopt the new philosophy about his injury in order for him to be confident, patient, and determined when he begins recovery. The next time Ron engages in his fears about returning to competition, he will have prepared himself to refute his own fears and change his thinking for the better.