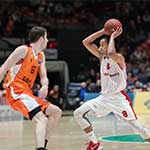 No one wants to talk about the five-letter dirty word “choke” in sports. It happens at all levels in sports and performance from junior to professional athletes. It is what every athlete fears the most — to feel embarrassed by blowing a big lead. Everyone is different in how they experience pressure and ultimately how it affects them. Some athletes thrive on pressure whereas others collapse under pressure. Even the best athletes in the world can, at times, crumble under intense pressure.

The best athletes in the world such as Tiger Woods, Lebron James, Annika Sorenstam, and Ronaldo, use pressure to there advantage and can perform at there absolute best in crunch time. However, not every world-class athlete is perfect as was recently seen with Maria Sharapova in this years French open at Roland Garros.

Maria Sharapova, the 2004 Wimbledon Tennis Champion, is known as a tough, focused competitor on the women’s PTA tennis tour. However, at this years French Open, we learned that even the best players in the world struggle with the mental part of the game…at least once in their career. Maybe the first time in her career or since she won Wimbledon, Sharapova choked away a Grand Slam match against another player that she should beat easily.

I won’t dwell on how Sharapova gave the first set to her competitor, Dinara Safina after being up a break. The big shock came in the third set of the match, after winning the 2nd set handedly, 6-2. She was firing on all cylinders and had a 5-1 lead in the last of three sets. And suddenly, she couldn’t get the ball back over the net, at least in her opponent’s court. Sharapova lost 18 of the final 21 points and squandered a huge lead to Dinara Safina, losing 7-5, 2-6, 7-5. Everyone watching the match was shocked including me.

It is hard to watch a skilled player crumble under the pressure and blow a huge lead.

Sharapova wrote it off the match as not being tournament tough and being out of action due to an ankle injury. “Unfortunately, I haven’t played a lot of matches in the past weeks and don’t feel like I’m match tough enough,” said Sharapova, “In that first set, I should have closed it out. Then in the third.” When I translate her English, I come up with this: “My confidence is not up the par with the confidence I need to be able to close out a Grand Slam match.”

Sharapova, in the third set, clearly was frustrated with her errors and lost her composure when Safina got on a roll. “At that point you’re thinking left and right, and you don’t know what you’re doing,” Sharapova said about Safina’s charge in the third. “You go into a different world. You make dumb decisions.” Or lose your composure altogether.

Stuff happens, especially when you get defensive with a big lead — the old comfort zone mindset creeps in and you mind goes into protect mode — then your opponent finds her rhythm suddenly and becomes more aggressive and confident.

Therefore, now you know that even the best athletes in the world sometimes struggle with confidence and closing out a match. You can see it all the time in sports. The athlete with the most confidence in crunch time — willing to lay it on the line — will prevail almost every time.

How can a confident-looking athlete with several pro wins under her belt lose confidence and momentum right at the wrong time in the match? I think it comes from doubt and beliefs about her ability to close off a match. When you come back from an injury and have to play with full confidence, sometimes it hard to fend off doubt or the inner monster. “Am I ready to win?” you ask yourself. “Can I pull off a long match after coming off an injury?” the inner critic knocks on the door of confidence.

Four mindsets that help you play your best in crunch time.

Below are four mental skills you can apply to avoid a mental game collapse and play to your potential in crunch time.

Playing beyond your comfort zone

Some athletes who mount a big lead over an opponent, struggle with confidence just at the time you think they should be high on the confidence wagon. I think this is a comfort zone issue in that you question if you should be winning the game or match altogether because of some preconceived notions you bring into the competition. Preconceived notions such as “I am playing beyond what I am capable of” or “I shouldn’t be beating this player, he is better than me,” or “I will start to play poorly as I have never been in this position before” will typically keep you stuck in a comfort zone. I help my students identify these limiting beliefs and replace them with rational thoughts about how to play even better. Additionally, leaving your expectations at home and instead focusing on how to execute with greater focus will help you leave your comfort zone.

Use positive self-talk to see yourself as a winner.

If you find yourself on the wrong end of the confidence continuum — low self-confidence just at the time you need it most — you should evaluate your beliefs and thoughts you bring into competition. For example, if I label myself as a poor closer or crunch-time “choker,” I will most certainly live up to this label and then not perform up to my ability in crunch-time. Therefore, it is important you use positive self-talk such as ‘I excel at crunch time’ or ‘I will close this set out with ease’. This will dial in your ability to see yourself as a winner.

Have a process focus

Some athletes when they enter crunch-time get distracted by thoughts such as “If I don’t win this point, will it go to another set?” or “I really need to play perfectly to win the match.” These thoughts detract from what is important for successful execution. It is essential to stay entirely focused on the cues that help you execute. By this, I mean focus on the thoughts or targets that are relevant to executing the task successfully. One example of a process focus is thinking about where you want to place the ball in the receivers serve box. This will narrow your focus on immediate execution and help you develop a crunch-time mindset.

During crunch-time, some athletes think they are great in the clutch and others know they have a good chance at folding the match. In crunch time, it is important to stay positive and believe in you ability to execute when it matters. One way you can give yourself a boost to self-confidence is to recall past successful attempts to close out matches. Confidence must to be sturdy when you are under pressure so you can stomp out any doubts about your ability to close the match